Lets face it, most of us have a bucket list, even if it's just in our heads. But how many of you have thought about adding something a little bit different to your list? This post comes to you courtesy of my husband, who explains how, during his years of travel, he has swapped many of the traditional bucket list items for experiences that are a bit more unique! 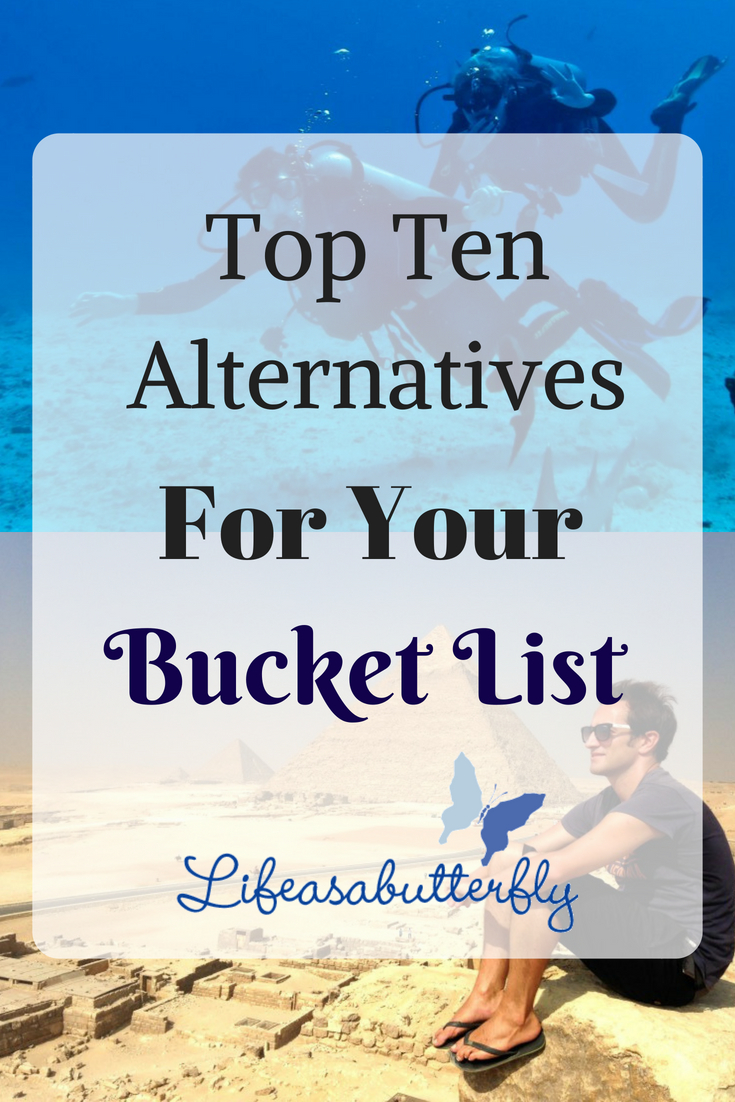 Ok what's top of every bucket list you've ever seen? Yep, swim with dolphins…well that tends to be either in a small pool sized section of the sea with endless tourists lining up in life jackets waiting to have their selfie kissing the dolphin. This isn't exactly kind to the animals, so personally I would avoid.

What if you bucked the trend, and instead swam with sharks? Super fast powerful killing machines with razor sharp teeth and could gobble up an arm before you could scream! Well it's actually safer than you think, sharks tend to hunt at night and sleep during the day. They just have to keep moving whilst being asleep. Places like Thailand, South Africa and the Galápagos offer safe exhilarating experiences with a slightly different picture at the end of it. And it's in their natural habitat, so is kind to the animals too!

Don’t just see the Pyramids in Egypt, climb one my guide said to me! Ok so this is not allowed, in fact it's probably illegal, but before you start chastising me, I was approached by my guide to do it and apparently it’s all the rage with the Japanese!

All you have to do is pass some money onto your tour guide. When given the go ahead, climb, climb, climb! You might get shouted at but it's all for show…because they can’t let just anyone and everyone climb the pyramids, or there would be none left!

Once you’re at the top, you can take the most amazing pictures of the Pyramids, and that's exactly what we did! Whilst this was pretty unique and I thought it was cool at the time, I wouldn't recommend this now. Education on this type of thing wasn't what it is nowadays and I was young and naive. Not only do you not want to be locked up in an Egyptian jail, but you should do your role in preserving these stunning monuments as a tourist, not destroy them. Instead, why not go to a nearby high building or take a helicopter tour to get cool photos!

Zip line off the Great Wall of China

Walking a section of the Great Wall of China is an amazing experience…unless you have taken a tour out of Beijing with everyone else and end up walking the same stretch which is overcrowded and full of hustle and bustle. All those imagined pictures of the mystical wall weaving over the hills into the distance instead becomes a picture of the back of hundreds of heads as they slowly queue their way along the wall.

So here’s the tip, don't take the tour, instead find a local guide and ask to go out further. Yes, you'll need to get up earlier, but hey you'll probably be jet-lagged so won't know the time anyway. If you go far enough you'll come across a deserted section of the wall you can walk along. The section I walked along had a lake and then the most amazing zip line in the world. Now that's a picture that will make it onto your ‘Insta-worthy' list!

So this is an odd one, why would I want you to do this? Well I wouldn't, the experience is pretty horrible, but I instantly gained respect from my fellow backpackers and lived to tell a pretty cool story.

Along with most tourists, I suffered from ‘Delhi Belly’ from a curry cooked by the Ganges…well at least I thought that's what it was. Cue endless vomiting and diarrhoea and my friend insisting I was just being a wuss. Finally, he agreed I needed help, so I was taken to the doctor, who, it turned out, was the local plumber who had a son who studied medicine in England. He looked at me, sat me on the back of a moped and we raced off to a hospital…except it was more like a derelict building. I was prodded and stabbed with different needles without explanation as no one spoke English.

Finally, someone came to explain to me that I had dysentery. When I asked questions, the man didn't know anything, he was actually a cleaner from the building opposite.

I spent 2 nights in the hospital which was a real experience. I became a tourist attraction as the only foreigner in the building. People were asking to have their picture taken with me! When I got out I asked others if they had a similar experience? One said he was in a hospital for a week with Typhoid, and another a month with Malaria-now that's hardcore.

Should you do this? Absolutely no, but if you do, wow what a story and a tick on a bucket list no others will have!

So Rio de Janeiro is probably a pretty popular destination right now with having the football World Cup and Olympics. There's a few different ways to see the city-taxi, bus, walk…but surely the best is to hang glide from one of the mountains that surround the city, fly over the top of the skyline and then land like a hero on Copacabana beach. It's a definite must do!

See fish that can walk

When you think of Thailand’s things to do, it's generally a full moon party, relax on the white sand beaches, ride an elephant and jungle trek in the north. Well what about seeing some fish that can walk? Yep that's right, fish that have arms and can walk, they’re real I promise. In the south of the country in Phangna (you'll need to get dropped off by a bus and walk the final way to the town), hire a kayak with a guide and go paddling out into the sea. He’ll show you caves with beaches inside (Emerald Beach) and trees that grow out of the water. And in those trees you'll find fish with arms…and they walk around the tree, and then drop into the water and swim off. Incredible.

What's the fastest car over a speed bump, I ask you? A Ferrari? Porsche? Range Rover? It's none of these…it's a hire car. They're also great at hand brake turns! Mine was a small red Fiat in Jordan, and I managed to put a large whole down the side of a gold Mercedes S Class…ouch! Thankfully it wasn't my fault, but as ever in foreign countries, the police always side with the local… so we took a little hit on our insurance. My wife still ribs me about it to this day.

If I was to say to you, let's go see an animal bigger than you that is really old, slow moving and doesn't do a lot, you'd think elephant right? Maybe a rhino? Most likely an African safari animal? Well actually I mean a giant tortoise, and I don't mean hunting in the American sense of the word. I mean go find and take a picture of one. In the Galápagos Islands there are ranches where these wonderful animals roam wild through thick grass, trees and lakes. The sheer excitement of seeing a huge shell poking it's head above tall grass and then trying to get close enough for a picture without scaring is such great fun! Just make sure that you follow the rules-don't get closer than you're allowed and don't touch them to be on the safe-side.

Undertake your own air-crash investigation

Climbing a mountain is on most people's bucket list, I've done a few myself-Kilimanjaro and Annapurna. But why just climb the mountain, why not go on an adventure at the same time. In the Atlas Mountains in Morroco is Mount Toubkal.

When we began our descent from the summit last summer we discovered the left overs of a plane crash! To take a look hire a local guide and make sure you get to the summit early, then ask to be taken to the plane and witness something quite remarkable. On the peak of another section of the mountain is parts of a plane, including the engine that smashed into the mountain in the 1970s.

No one knows who the plane belongs to and no one knows who was aboard. It's a complete mystery. Descend from there and you'll continue to find aeroplane parts that have lasted the test of time. It's sad to see but very interesting and educational.

Ok so you went to South East Asia, and decided after a few Changs to try the street food. I don't mean the noodles, I mean the bugs. Ants, crickets, cockroaches, tarantulas etc. Everyone has done it (well even it seems except my wife!), and to be honest it's a bit of a rite of passage for backpackers. But don't just try it, bring it home for others to try! Do what I did. Have an Asian themed wedding and place some of the bugs on the bar to see which of your uncles is brave enough to bite the head off a cockroach?! I promise you it will get the crowd talking!

Do you have any suggestions for alternative bucket list items? I'd love to hear them- drop them in the comment box below!