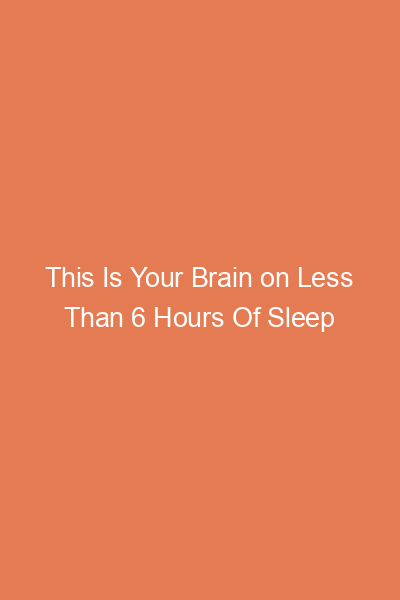 This Is Your Brain on Less Than 6 Hours Of Sleep

Unfortunately, sleep is widely viewed as a simple luxury: a little downtime from daily activity. Few people realize the impact that good and bad sleep habits can have on their overall health and well-being.

A shortage of zzz’s can impact your body on multiple levels.

Along with the increased risk of developing diabetes and heart disease, this will also make you more susceptible to high cholesterol, high blood pressure, excess fat especially around your midsection, and excess amounts of fat in the blood.

The dangerous combination of this multitude of medical conditions is known as metabolic syndrome. ‘Short' sleepers should be aware that they are at risk of developing this syndrome, which could result in them suffering from life-threatening and chronic diseases.

But aside from the impact, it has on your body, what exactly does a lack of enough sleep do to your brain?

While you are in peaceful slumber, your brain goes to work, cleansing itself of toxins and waste that build up throughout the day.

Studies show beyond doubt that not getting enough sleep is highly detrimental to your mental health and productivity.

The journal Sleep published one such sleep deprivation study. They took 48 adults and restricted their sleep to a maximum of four, six or eight hours a night for a whole two weeks. Another set of subjects were deprived of sleep for three days straight.  The subjects were tested every two hours to assess their reaction times, cognitive performances, how their mood was, and how sleepy they felt.

At the end of the study, the subjects who slept eight hours per night had the highest average performance. Those who slept for only four hours got worse each day. The group who got six hours of sleep seemed to perform alright until the tenth day of the study.

Why six hours of sleep (or fewer) is not enough:

After day 10, the subjects who were allowed only six hours of sleep demonstrated a cognitive performance as bad as those who weren't allowed to sleep at all. What's even more alarming is that, while the no-sleep and four-hour groups rated their sleepiness level progressively higher, those who were in the six-hour sleep group didn't rate their sleepiness as bad at all, even though their cognitive performance was declining.

This emphasizes how harmful the cumulative lack of sleep can be on your mental ability. These studies further draw attention to how those who are sleep deprived cope by being in denial and are unaware of their deteriorating state.

A lack of sleep means your brain has to work harder. Studies show that sleep deprivation has a dampening impact on brain cell activity, causing them to send their signals at slower speeds when you're tired.

The longer your brain is working without the recovery break it gets from sleep, the more fatigued it gets, and the more your ability to use logical reasoning or complex thought gets hampered.

While you assume you are getting by on insufficient sleep, there is actually a sharp decline in your working memory. Without short term memory, it becomes hard to hold even the digits of a recently memorized telephone number in mind.

Without enough sleep, your brain doesn't go through the essential processes that allow it to process new memories and form new neural pathways that would enable you to remember and solve complex problems.

Your long-term memory gets affected:

Sleep is essential for consolidating memories and sorting through information. What we learn throughout the day gets solidified and stored in long term memory as we pass through the different stages of sleep.

Without this, it becomes difficult to form long-term memories and your ability to learn new skills is disrupted.

As the deficiency of sleep accumulates, you will find a decline in your attention quality and span. This results in the strange, distracted and disconnected feeling that usually sets in when one is tired.

This is one of the biggest dangers of lack of sleep as it directly affects driving, work and other tasks. Some estimates show that 20% of car crashes each year occur because of driver fatigue.

90% of adult patients with depression experience some kind of sleep problem.  Inversely, sleep issues increase the risk of developing major depression. Many studies show that, in patients suffering from depression, sleep troubles developed before major depression did.

This happens because perpetual exhaustion disturbs the neurotransmitters in the brain that regulate mood and anxiety.

The integrity of white matter in the brain gets compromised with insufficient sleep. This can also result in the death of some brain cells and is detrimental to neurogenesis, the process of generation of new brain cells.

People who are sleep deprived usually don't realize the massive toll it takes on their cognitive and mental health. Sure signs that you aren't sleeping enough is if you:

To avoid the ill effects of a shortage of sleep, people should scrutinize their daily routines. It is always possible to make enough time to rest in your schedule. All it needs is some pre-planning and discipline.

Altering other factors like lifestyle habits (diet, caffeine and alcohol intake), tweaking physical activity and employing relaxation techniques can all help encourage a night of restful and rejuvenating sleep.

If you have any queries about sleep health or are facing problems with your sleep habits, book an online consultation with the health care experts at Click Pharmacy for professional medical guidance, online prescriptions for ordering any medication you may require.