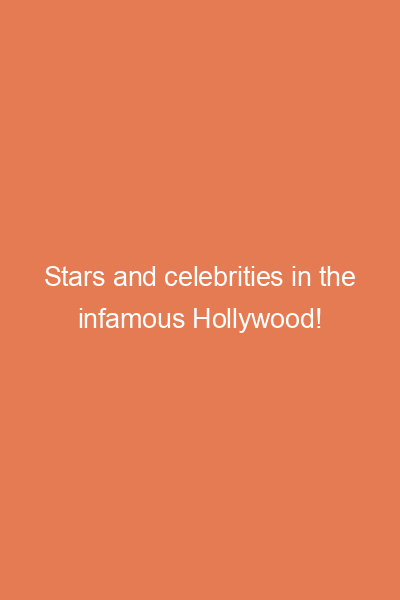 Stars and celebrities in the infamous Hollywood!

OK so Hollywood was never my first choice of destination, but seen as I was in the neighbourhood it would be criminal not to visit surely?! As anybody that knows me will know, I am rubbish with famous people-and I mean rubbish! Ask me the name of an actor or who sings a song and I will almost never be able to tell you! I could be sitting next to somebody very famous and I probably wouldn’t even know! But this aside, I thought I would take a visit to the most celebrity focussed place in the world, and see what all the fuss is about!

I didn’t really know what to expect to be honest. We drove from where we were staying in LA to Hollywood, which with the traffic filled roads this state has took a while! After traffic, getting lost and generally having to pay extra attention due to be driving on the other side of the road we finally made it to the land of the celebs.

We stayed here for the majority of the day and decided to commence by hopping on the open top bus. A very touristy option I know, but it was very informative; pointing out bars owned by particular celebrities, famous spots, celebrity’s houses etc- that you wouldn’t have got if you did it yourself!

It was a pleasantly warm August afternoon, and it was very enjoyable to just casually stroll along the Hollywood boulevard, checking out what it has to offer. We decided to exchange the bus for some ‘by foot exploration’ and it was very interesting to see everything the area had to offer. Naturally, there were lots of tourist shops, and we did ourselves purchase some souvenirs for family and friends back home. The streets were full of tourists, although it wasn’t too overcrowded.

All of the streets are lined with stars with celebrity’s names in them. Naturally, I didn’t know who most of them were, but it was fun to have a look anyway. If you’re big on celebrities then this is the place for you! I saw a few I recognised and took pictures of these. Britney Spears, Tina Turner, Tom Jones etc etc. I even found a star for Loreal which reminded me of my sister who is a hairdresser so I took a picture of that one for her!

Loreal- This one's for u sis!

While we were walking down the street there was some sort of premier going on too! There were crowds of people all gathered around the red carpet area screaming for the people walking along. Again, don’t ask me who they were! It was quite interesting to see though! I think it was for some dance movie that was coming out at the time.

The pavement along the street is glittery, and appears perfectly polished. The array of stars continues for perhaps a mile or more down the street. It seemed like we were walking along looking at all the stars for hours! There are just so many! Towards the end of our stroll we came across a mime dressed as Michael Jackson- and wow did he look like him! It was quite eerie actually!

Near where Michael was there was an area where celebrities have put hand/foot prints into the concrete. This area was RAMMED with tourists all trying to see how their own hands/feet fit into those of the famous. It was actually quite amazing to put your hand into Will Smiths hand prints… and many of the other celebs too. They seem so far, yet so close at the same time! It makes the person you see in the movies seems far more real!

Will Smith's hand and footprints

After all this excitement we enjoyed a couple of drinks (unfortunately didn’t indulge in the cocktails in true Hollywood style at this time as I still had to endure the left hand drive back!), and marvelled at the setting we were in. Beyond the boulevard were the infamous Hollywood hills, where we could see the distant lives of some of the celebrities of whose stars we had probably just looked at. The Hollywood sign was far in the distance. It was a lovely setting, that somehow felt a bit dream like- glittery streets, meeting Michael Jackson, putting my feet quite literally into Tom hanks’ footprints, being in a place that you have only ever seen on TV… yet it wasn’t a dream at all. It was a lovely day, full of glitz and glamour, in true LA style : )