Emirates Corruption: How One Girl’s Dream Job has Turned into her Worst Nightmare

This is a post sent to me by a young Cabin Crew member working for a leading airline in Dubai. Her cries for help really pulled at my heart-strings and I hope that there is some way that we as the travel community might be able to help her, or at the very least raise awareness of a potential corruption issue within the Emirati Government and the airline that does not appear to have been raised before. Here is her story:

“I joined the airline in June 2015, the start of an exciting new adventure.

Training was so cool, I had a nice training batch, made new friends and we worked hard but had loads of fun. As a batch we went for dinners, drinks and clubbing. Dubai was the best, or so I thought.

One night I met a few very influential guys, government employees. One guy was throwing money at me, dinner in the best restaurants, exclusive clubs, VIP areas, expensive drinks and house parties and his home, I was living the dream!

I had a great job, flying all over the world and when in Dubai I was treated to only the best of everything. What more could you ask for?

But then everything changed. He started to expect returns. He became touchy and asked for sex. I turned them down and stopped seeing him.

That was the start of my nightmare!

Like any young girl I took loads of selfies and posted pictures on social media of the drinking and partying. There was one photo where I jokingly kissed a fellow crew member, a girl.

Much to my dismay the pictures were emailed to the police, out of context. I was portrayed as a girl who had no respect for the UAE laws, I was accused of alcohol abuse, having sex and doing drugs!

A senior Manager called me, he guaranteed me an early upgrade to first class, good rosters everything cabin crew dream of, he also said the police will stop the investigation. The only catch… I had to keep partying with the Government guy.

I turned him down.

Now to this day the harassment does not stop. Almost everyday I receive calls and threatening messages. I have changed my number but the guy and his friends are powerful, it was not long before I started getting them on the new number.

I told my CCM and she looked into my story. I’m not sure if she stepped on toes but I was then assigned a new CCM. (I have had 3 CCM in the space of a few months)

The airline suspended me, then placed me back on active duty, I got loads of turnaround flights, this month I am on standby for the whole month. This guy has lots of influence. He has the power to manipulate my roster. 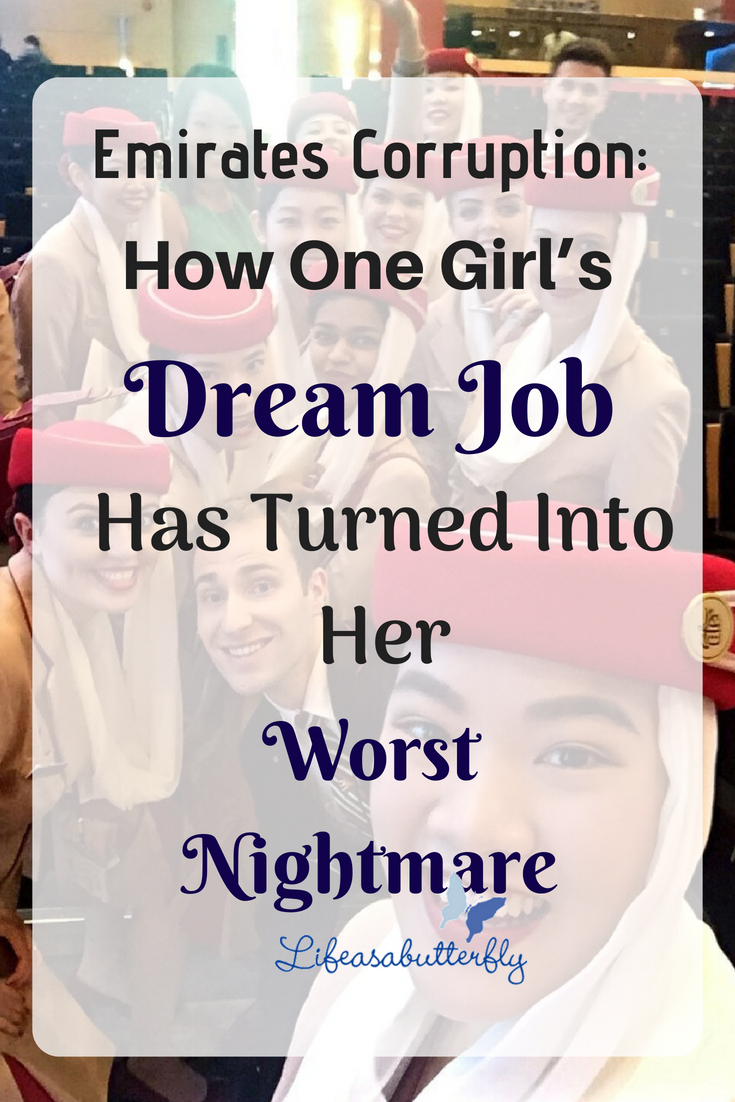 I am scared and I don’t know what to do…. I can't give in but being in and out of group security and the police station was not the dream I had. My dream job has turned into a complete nightmare. I wanted to share this with your followers as if my story can help prevent only one girl from going through the same hell as me it has served a purpose.”

If you have any advice or help that you can offer this young girl,  please leave a comment below!

*disclaimer. This post was written by a crew member at Emirates airline who gave her full permission for this to be published. Photos were provided with consent for them to be used. Lifeasabutterfly holds no responsibility for the accuracy of any information presented here.*