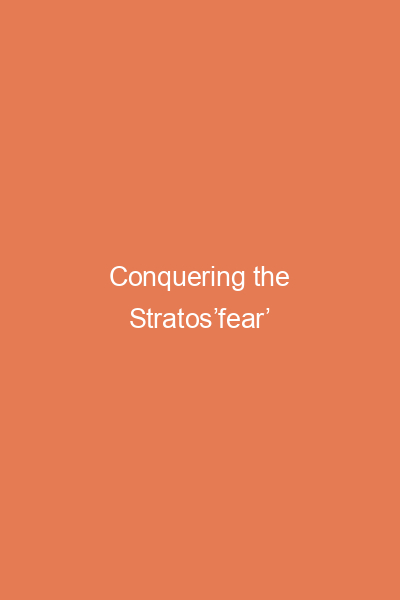 The Stratosphere is a hotel at the bottom of the Vegas strip and towers 1149ft above the hustle and bustle below. The tower itself stands out amongst the Vegas skyline and provides incredible views of the strip and desert beyond. It is quite something, and well worth a visit when in Vegas.

Recent years have seen me develop a fear of heights, I have no specific reason for this, it just seems to have happened. And my first true realisation of this was my visit up to the top of the Stratosphere tower.

The lift taking you to the top seemed to last forever, I began to feel a little nervous at the prospect of stepping out onto such heights. When I finally reached the top I did not want to leave the observatory area. However after a few minutes of my friend trying to coerce me, I finally stepped out.

The wind was really powerful and was blowing my hair in my face. It was a lot colder than on the ground. The views were immense. I could see the view from the edge-why would I need to move any closer to the railings?

I was so petrified of this experience you couldn’t have paid me to go and hold onto those railings! I stuck near to the wall and could barely move. People were looking at me and laughing. I am not normally like this-where has this fear come from?!

I spent ages glued to the wall and I could see that my friend was starting to get tired of it. She really wanted to go on some of the rides at the top of the tower that were available. ‘No way!!!!’ I told her.

There were several rides there, first of all there was a ride where you would all sit around a pole and get shot into the air and back down at high speeds. This was on the point of the tower. I don’t like those sorts of rides on the ground let alone at this height!! Secondly, there was a circular spinning ride that dangled you over the edge of the tower, again it looked petrifying! And thirdly there was a roller coaster type carriage that would shoot you off the edge of the tower and then retract. They all looked insanely scary to me.

However, after being a complete woos for what had probably been around an hour by this time, out of somewhere I developed this sudden boost of courage! I went over to those railings, followed by the roller coaster type ride!

The ride was sooooo scary! I absolutely almost wet myself from fright! I was being flung over the side of a 1149ft building at quite some speed and then dangled, overlooking the drop below! Who on earth thought up such an idea?!

Afterwards I had to purchase the photo souvenir as proof. I was quite proud of myself 🙂

Petrified on the top of the Stratosphere!

So I managed to get myself together and to stop shaking and went back down to the ground-where I liked it! From here we decided to check out some of the other hotels on the strip and went off exploring.

We were minding our own business at the New York New York hotel which was the a very long way from the Stratosphere when a man approached me. He said to me ‘do you feel better now your feet are firmly on the ground?’ I was very confused- I had never seen this man before!

He explained to me that he had been up the tower when I was glued to the wall and had seen how scared I was. I laughed and told him that I had since been on the roller coaster type ride! He was astounded, so much so that he called over his group of friends (about 10 other aged 50+ Americans) and they were all quizzing me about it and laughing at me!

It was so odd that I was approached about this in a completely different hotel, by people I had not even noticed! But then again I guess I was a bit preoccupied at the time to be looking at the people around me. Wow- what a funny experience!

I think perhaps this experience has scared me for life, as ever since I have been just as afraid of heights! What a memorable day!