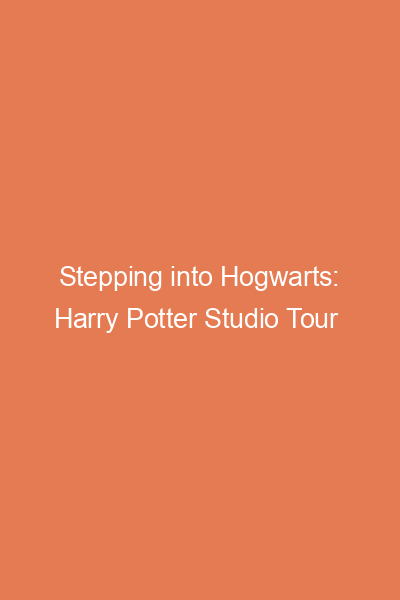 There are so many Harry Potter fans out there, it was ingenious to open up the studios, home to the wizard stars for 10 whole years, as the latest tourist attraction.

The studios opened back in April this year and bookings have been taken weeks in advance ever since. A few people I know have visited so far and all have given excellent reviews, so there was no doubt about it that I was going to be making an appearance very soon! So after waiting over a month for a tour date, I was finally able to enter the world of Harry Potter-quite literally!

Upon arriving in the car park you are greeted with huge posters of members of the cast, and some examples of the giant chess pieces- a nice touch I thought. After collecting your tickets you enter the lobby area where you will queue for your tour. As soon as you enter the building you are immediately greeted with the magical mysteriousness that you would associate with Harry Potter. The walls are lined with various artefacts and memorabilia from the films, whilst many tourists are dressed in witches’ hats and Potter glasses (my favourite was a little boy with Potter glasses and a scar drawn on his head! So cute!).

When you near the front of the queue you are given a taster of what’s inside from the first setting displayed-the cupboard under the stairs! I’m sure most people who have watched the films have thought ‘ah poor Harry living in that small cupboard’. Well however small you thought it was-it is probably smaller in reality! It’s amazing to look at this cupboard and picture the young actor doing some of his very first scenes ever here!

Just before you are allowed to enter you are held at the door where a rather annoying steward makes you sing songs and chants about Harry Potter and the cast. A nice touch initially, but got boring rather quickly. [They were trying to do this chant http://www.youtube.com/watch?v=Tx1XIm6q4r4 but it really wasn’t working!]

You enter the studios into a room where you are introduced to the tour and shown a short video featuring Harry, Hermione and Ron. Then when the video is over the screen unexpectedly rises up to reveal the actual entrance door to Hogwarts-amazing! It was just like the first ever film when Professor Mcgonagall says the famous line ‘welcome to Hogwarts’… it felt creepily as if you had actually stepped into the film.

And as if that wasn’t impressive enough, when the doors were opened the magnificent Great Hall was revealed, and it really was magnificent! The floors and walls were actually made of solid stone and the tables were laid up as if you were about to tuck into your first Hogwarts meal. Apparently the studios’ appearance would change almost daily, with sets continuously being created and destroyed to make room for the next. The Great Hall however was a permanent fixture, and to allow for the large number of people that would be entering this room throughout the duration of the films it was made in just as brilliant quality as it would be in real life.

From here there were two parts to the tour. On average people spend about an hour and a half in each, examining all the artefacts and breathing in the life of Harry and the team over the 10 years that they were there.

The first room was abundant with Potter artefacts. There were all sorts of cool things from the films. From the golden snitch to Dumbledore’s office to the ACTUAL Diagon Alley, you could easily spend all day admiring the world of Potter before you. I won’t describe everything I saw as I would be here all day, but here are a few of my favourites…

Towards the end of the first room you had the chance to ride a broomstick in actual Hogwarts robes-amazing!! You would ride an electronic broomstick, and they would impose different backgrounds for you to choose for your picture. You could also choose to ride in the car and have your picture taken above the infamous Potter train! The pictures were fantastic!

Once you finished in the first room you were led outside where you could buy BUTTER BEER!!! OK, so it’s not actually alcoholic, but it was fantastic! It tasted a bit like a butterscotch cream soda! Outside there was also Privet Drive and Harry’s house, the house where his parents were killed, the nigh-bus and Hogwarts bridge.

The second room was more about design. It had many of the costumes that had been worn for the films, life size models of the characters, architecture details and the model of the castle itself-which again, was amazing!

At the end of the tour you enter the shop, which is filled with cool things from the film. One person I know said that they bought the ‘every flavour beans’ and actually got a snot flavoured one!! They had chocolate toads. Cloaks and even wands for sale! I think it would be very difficult to have been to the studio tour and not purchase some of these goodies…!

I could ramble on all day about how amazing the tour was, but I guess I should leave some of the magic for you to discover yourself…! 🙂