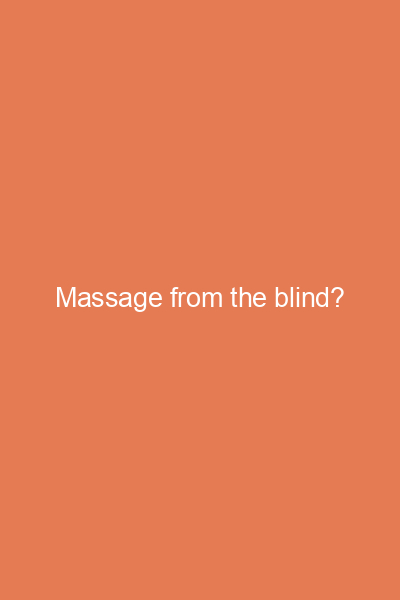 Massage from the blind?

While in Asia, I will admit, I did begin to develop a bit of an addiction to massages! In almost every destination I tested out the local massage- (almost) all of which were great!

When in Saigon, Vietnam, my friends and I decided we would like to go and get a massage one evening. Each having our Lonely Planet guides (AKA traveller’s bible) that we had read thoroughly we had heard about a place offering massages from the blind. We thought this sounded very unusual and it certainly did grab our attention!

Massages in Asia were generally very cheap, and compared to Western standards Vietnam was no different, however it did generally cost a couple of USD more than most of Asia, plus they expected a tip! So when we saw the competitive prices offered for the blind massages we thought we would go and investigate!

Using the maps in our LP guides, and after a long walk through dirty Vietnamese city streets in the torrential monsoon rain we finally reached our destination. It was a building that somewhat resembled a school, and certainly did not look like a massage parlour! It was set back from the main street and was dimly lit. It was all rather eerie.

As we slowly and nervously crept closer to what we thought could be an entrance to the venue, we were met by an American couple, roughly the same age as us. They had just experienced the blind massage and seemed very tetchy!

They told us it was painful and creepy! They said it was an experience however, but they seemed very nervous-and it had been over a few minutes already!

This put us all on edge a bit, and we stood by the entrance discussing whether we should go in or not. In the end we decided we should- after all- this is not an experience you have every day!!

So we nervously crept up the stairs and through the door. There was no reception as such and there were several rooms with the doors open. In each room there were beds lined up, separated by green curtains. It looked just like a hospital. Not the best setting for a nice, relaxing massage.

We stood there for a couple of minutes, aimlessly looking around for someone that could direct us. But nobody paid any attention to us.

There were people everywhere though! They were shouting at each other, really loudly! It was really unnerving. They were walking around and bumping into things-including us if we hadn’t moved out of the way!

But for me, the creepiest thing was the eyes. Their eyes had really small pupils and lots of white. They looked really eerie and they would look right at you.

I think it was a combination of the shouting, the eerie setting and the eyes, and of course what the couple had told us on the way in, but we were well and truly FREAKED OUT! I know it is sad that they are blind and it is good that they run such an establishment etc, but I was genuinely scared! The girls and I didn’t say a word to each other-we were just out of there! It actually reminded me of a scene from resident evil or something….

Completely shaken up from this experience, we continued our search for a ‘normal’ massage parlour…and when we found one it was entirely worth it as it was possibly the best massage I had in the whole of Asia!

This whole experience only lasted a few minutes, but it was a rather memorable few minutes!!! The blind massage that never happened and succeeded in freaking me the hell out….!!!

If you have experienced something like this on your travels it can be very helpful to speak to someone about it. I recommend BetterHelp.com, where they have a number of qualified online therapists.