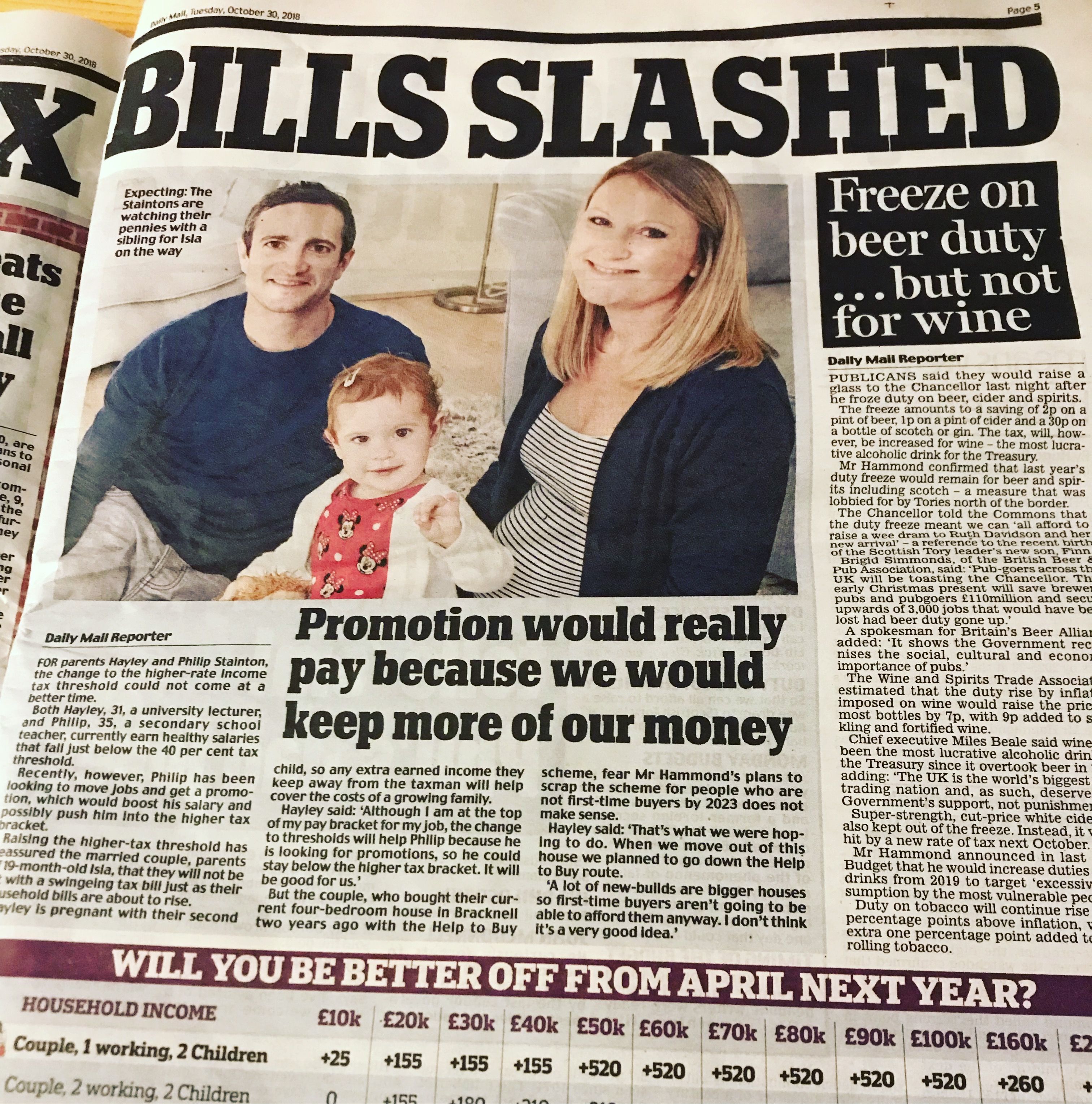 Featured: How the 2018 Autumn Budget will make you Better Off

This autumn was an exciting time as we were featured in an article about how the autumn budget will make you off by the Daily Mail!

The double-page article was featured on page 5 of the Daily Mail on 30th October 2018. It can also be found on the Mail Online here- ‘So will the Budget make YOU better off? Two couples reveal how Chancellor's plans to lift thresholds for basic and higher rate tax will help their families – as 32 million Britons are in line to save up to £860’ 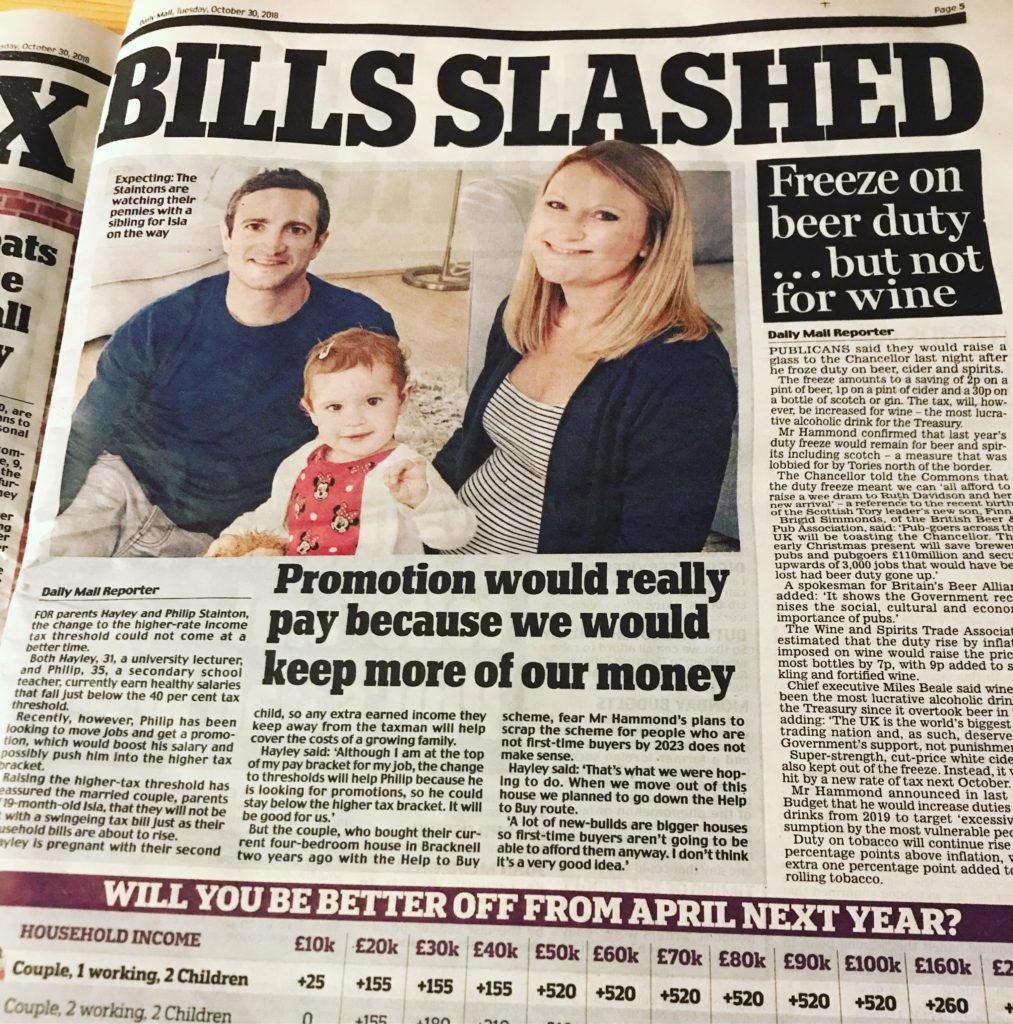 Here is a snippet of our section of the article-

‘For parents Hayley and Philip Stainton, the change to the higher-rate income tax threshold could not come at a better time.

Both Hayley, 31, a university lecturer, and Philip, 35, a secondary school teacher, currently earn healthy salaries that fall just below the 40 per cent tax threshold.

Recently, however, Philip has been looking to move jobs and get a promotion, which would boost his salary and possibly push him into the higher tax bracket.

Raising the higher-tax threshold has reassured the married couple, parents of 19-month-old Isla, that they will not be hit with a swingeing tax bill just as their household bills are about to rise.

Hayley is pregnant with their second child, so any extra earned income they keep away from the taxman will help cover the costs of a growing family.

Hayley said: ‘Although I am at the top of my pay bracket for my job, the change to thresholds will help Philip because he is looking for promotions, so he could stay below the higher tax bracket. It will be good for us.'

But the couple, who bought their current four-bedroom house in Bracknell two years ago with the Help to Buy scheme, fear Mr Hammond's plans to scrap the scheme for people who are not first-time buyers by 2023 does not make sense.

Hayley said: ‘That's what we were hoping to do. When we move out of this house we planned to go down the Help to Buy route.’

‘A lot of new-builds are bigger houses so first-time buyers aren't going to be able to afford them anyway. I don't think it's a very good idea.' 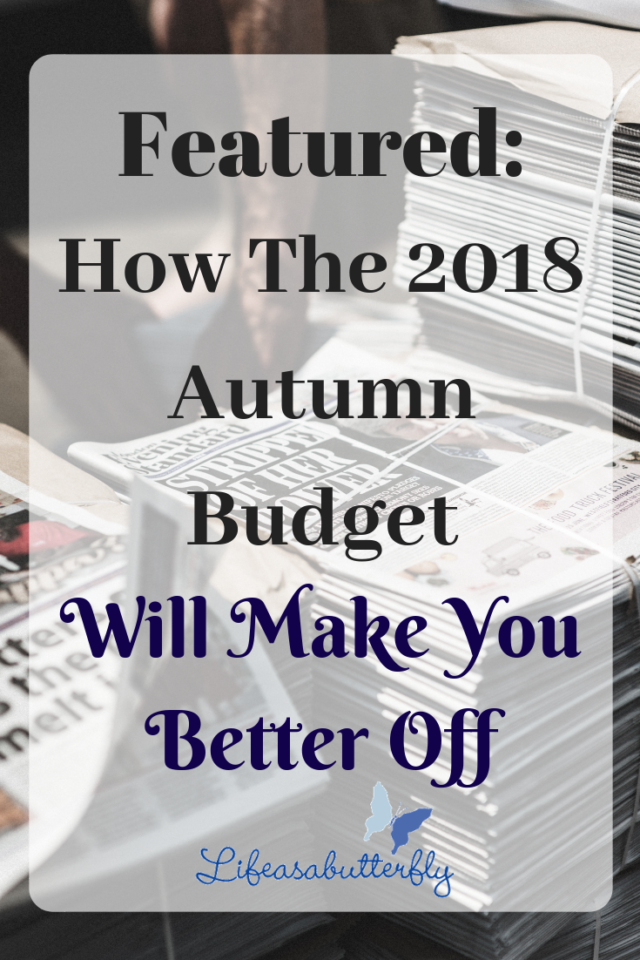 Whilst the article does represent what I said to the reporter, it doesn’t actually represent the whole story.

I also raised my concerns about the rising cost of living, BREXIT uncertainties and claims that ‘austerity is over’.

I also explained that my husband, Philip, is actually a Head of Year, not only a secondary school teacher. If you read through the comments on the Mail Online there are some remarks made about teacher salaries, which are largely justified and I feel that the way that Philip was referred to as a teacher was a little bit misleading.

Of course, as an academic, I am more than aware of the concept of bias. And as most of us know, the Daily Mail is a right leaning publication. So I suppose it was inevitable that they would avoid writing about my areas of concern (rising cost of living, BREXIT, austerity) because these things generally have resulted from conservative party policies and actions. There has also been a lot of negative publicity in the media about teacher salaries and a lack of funding directed at schools, so again I can see why portraying Philip as a teacher as opposed to a member of middle management might put the party is a good light in this regard.

In academia we are encouraged to write objectively and neutrally, so naturally this approach would be preferable to me. Nonetheless, it was pretty cool to be featured in the National Newspaper!

What are your views? Please leave your comments below.

*I plan to write about a number of the areas touched upon in this post in the near future keep an eye on the website or subscribe for updates.