The day I lost my passport in Taiwan

I'm always worried I'll lose something important when I travel and at the top of the list is my passport… luckily I have to date avoided this, but when Tariq contacted ted me to see if he could share his story I was happy to do so. Sounds like he had a lucky escape!!

The day I lost my passport in Taiwan

As it worked out, my girlfriend unexpectedly had to fly home from Vietnam the day before our visas expired, to attend to a family emergency. We had been planning to move on to the Philippines together, but due to this last minute change of plan I decided to travel on my own to in Taiwan instead and meet up with her in Manila in 10 days time. For the first time in six months, I was going to be on my own and travelling as a solo traveller.

A few nights into my Taipei itinerary, I took the train south to Kaohsiung and ,a few days later, I took a bus down to Kenting on the souther coast of Taiwan. I absolutely loved both of these places and was lucky enough to meet a great group of like minded people to go exploring with. This group was made up of a lovely Dutch couple and an American guy called Benson. He is the hero of this particular story. But we will get to that later.

This is us together after a day out exploring. 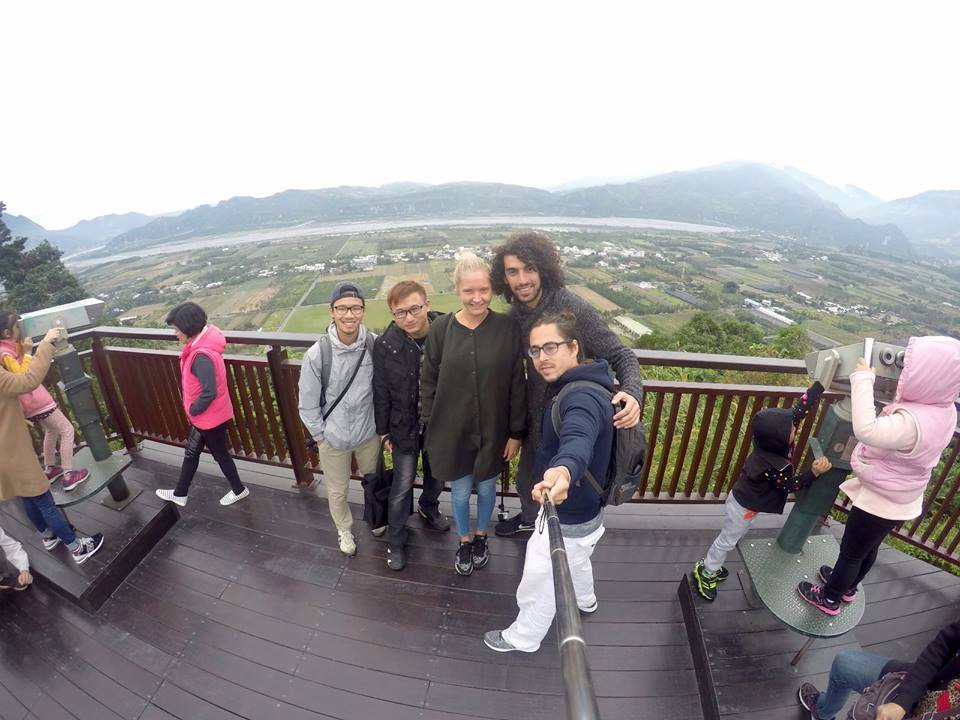 After a few days soaking up the sun on the on the beach, exploring the national park on scooters and generally eating everything in sight, we decided to all head to the town of Taichung, on the east coast of Taiwan. Having weighted up our options, we decided on taking on the train. We woke up early, checked out of our hostels and took a bus from Kenting to Fangliao train station, a journey of almost 2 hours. Boring details I know, but they will be relevant later in this story.

During the bus journey we chatted, watched the beautiful scenery pass by and I worked a little on my blog. As we were all backpackers, we decided to take the cheap local train, which took 2 1/2 hours to get us to Taitung. Here is a video I filmed showing some of the amazing scenery and the “local train” which very much reminded me of the trains I took in Sri Lanka.

As we arrived at our station at about 1.30pm, I packed up my bag and did my usual checks through my stuff. Wallet, check. Mobile, check, Passport…  It was at this point it felt like my stomach fell through the bottom of the train. My black nylon document wallet, containing my credit cards, sim cards and most importantly my passport, was not there. I checked under the seat, in the overheard rack and 20 other places that there was no way it could have been. Finally, when I was sure that it wasn’t on the train, got off just as the doors to the train shut behind me.

Seeing the panic written all over my face, my new friends began to enquire what was wrong. I am pretty sure all they got back from me was a string of expletives but I honestly can’t remember what I said. I tried to retrace my steps in my head. I was sure I had my passport when I checked out from the hostel. And if it wasn’t on the train, then surely I must have either dropped it at the train station or on the bus. I then began to try and recall the details of the bus we had taken from Kenting to the train station. What was the number of that route? Who operated it? They hadn’t given us bus tickets, so I couldn’t check that, and in my panicked state I couldn’t even recall what colour the bus had been. I tried to google the bus route but could only find websites and timetables in Chinese. It was here, in my darkest hour, that a hero emerged. Benson. I had met him in a dorm I was staying in a few nights before in Kenting. He was American from Philadelphia whose family were originally from China. He both spoke, and read, Chinese and had already helped us on numerous occasions interpreting menus and negotiating with the locals. Somehow, in a matter of minutes, Benson managed to track down the bus company, find their customer services telephone number and contacted them to explain what had happened. He left his number with the company and I booked the first fast train back to Fangliao to go and search for my passport..

And thats how we left it. I said goodbye to my new travel family and jumped on the next train. I sat there in the seat, with my head whirling with the ramifications of what was unfolding. I was supposed to be meeting my girlfriend in Manila in 2 days and with no passport, she would end up there on her own. A new passport would mean 6 weeks of waiting in Taiwan and an emergency passport meant flying back to the UK and most likely an end to my trip, 6 months earlier than planned. After so many counties, so many miles travelled on mopeds, local busses, boats and trains, was my epic adventure really going to end like this. It was almost too much to take.

And then it happened. Our group Facebook chat suddenly sprung to life and there, on my screen, were some of the greatest words anyone has every sent me. “They found it.” It turned out the bus company had located the bus we had taken and managed to contact the driver who confirmed he had found it. The icing on the cake was that the driver would be passing back through the same train station I was heading to about an hour after I arrived. Having drank one of the most joyful lattes of my life, I managed to pick up my passport and head back to Taitung in time to meet my friends for dinner. This is us at dinner that night.

Its so crazy that life forked so dramatically today. There were two paths ahead of me and fate, karma or whatever you want to call it dictated which I was to go down. At that point, the course of things to come  was totally out of my control.  And yet I am lucky enough to be able to continue on this incredible journey. To whoever, or whatever, was looking after me that day, thank you.