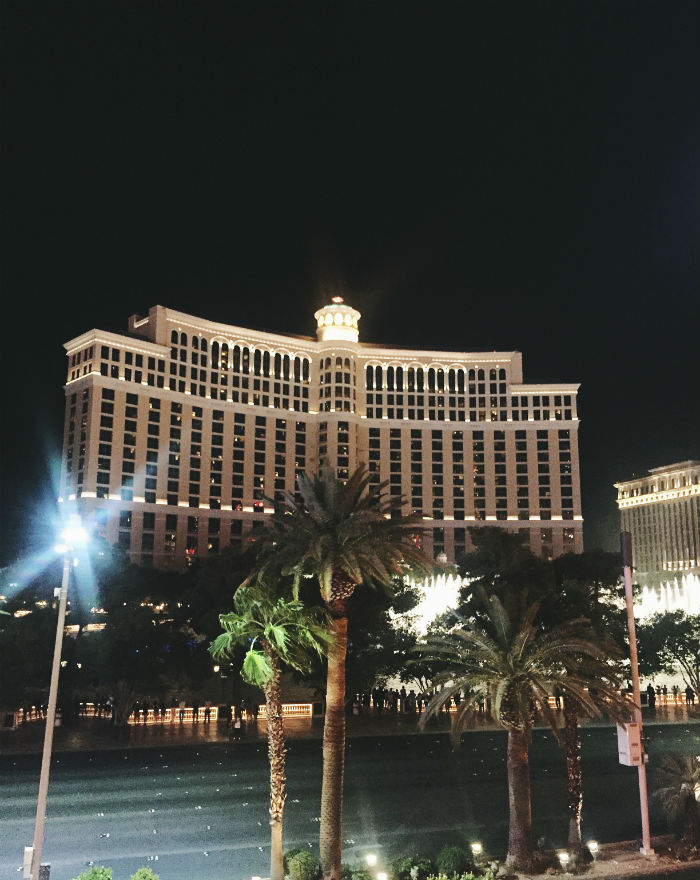 I’ve been to Las Vegas many times and one of the things I love is how much it keeps changing. New restaurants open up and favourite bars may no longer be there on the next trip.

Although it was a few months ago now I wanted to share an overview of what we did to perhaps give you some inspiration on your next trip!

We arrived after a 9-hour flight from the UK. From the airport, we jumped straight into a taxi to our hotel for the night, New York New York. It was the first time we’d stayed here. As we were staying for only a night, we picked the basic room which was still large and clean. We freshened up and headed for some Mexican food at Gonzalez y Gonzalez. On our last trip, we’d enjoyed the crab and bacon guacamole so we wanted to have it again! They make it tableside which I always like.

I love a Bud Light Lime when I’m in America so after food we grabbed a couple of bottles and went outside of the hotel. Recently this area has had a makeover, we grabbed a seat and watched the world go-by for a little bit. Soon, it was time for bed as jet lag was setting in!

As always when we travel to the states, we were up early and so we went for breakfast at Tom’s Urban for a proper American breakfast! After one night at NYNY, it was time to move to our next hotel for the rest of the trip, The Cosmopolitan. As we were attending a conference during the trip we booked through a special booking link and got an amazing room. It was a Tower Suite with a view of The Bellagio fountains – It’s one of the best rooms I’ve stayed in! After checking out our room we made our way via the Monorail from Bally’s over the road to the Las Vegas Conference Centre as we were booked to the Olympia Convention.

Once we had explored Olympia we hopped back on the monorail to the MGM Grand. This is a hotel we’ve stayed in many times before so know our way around, it’s the biggest single hotel on The Strip! In the evening we were watching the boxing which was taking place across the road at the T-Mobile Centre (next to NYNY) from the Ballroom at the MGM on the Closed Circuit TV. Firstly, we went to get out tickets for later before stopping at one of our favourite happy hours at Emerils. We had a couple of appetisers and drinks – The Vegas happy hours are a great way to try new places and often take place in the afternoon when the bars and restaurants are quieter. We soon headed back to the Ballroom for the boxing. It was a great experience, once it was finished we headed (with the massive crowds) back down the strip making our way to The Cosmopolitan where we found Secret Pizza in the Cosmo, we grabbed a pizza and went back to the room. It was so good we had it a few more times for lunch in our room!

Sunday it was time to relax and have some time at the pool. The Cosmopolitan has two pools, one in each tower. After a few hours, we went in search of lunch and to watch the NFL. We went back to Blondies in the Planet Hollywood Miracle Mile where we’ve watched sport before. We shared some tasty nachos and watched football Sunday. Afterwards, we decided to get an Uber downtown and visit The Mob Museum. It was really interesting to look around and see the history of Las Vegas and its connection to organised crime.

From the museum, we walked to Fremont Street, the original downtown Vegas with some of the old hotels. For food, we went to Triple 7 in the Main Street Hotel before having a walk around Freemont Street, exploring a few of the casinos. It’s fun to see the light show on the roof. It does get busy but it’s a fun experience and everywhere is a bit cheaper than on The Strip.

After a busy few days, we picked Monday for a day at the pool to chill out. In the evening we walked to Caesars Palace to go to The Cheesecake Factory. We’ve been here before and always enjoyed good food and great service. We weren’t disappointed, I had the Meatloaf and it was so good!

Before going back to our hotel we stopped off at The Beer Park which is outside Paris and has a great view of The Strip and the Bellagio fountains.

Again we had a pool morning to relax. I walked over to Planet Hollywood as I wanted to try Dry Bar and get my hair blow-dried. I’ve followed them on Instagram for awhile and it was a great experience. They’ve since opened one in The Cosmopolitan too!

In the evening we went to The Venetian and The Palazzo to go to Canonita for some delicious Mexican food and cocktails. Afterwards was walked back to the Cosmopolitan and went to the Chandelier Bar for drinks.

After a late night, it was time for some more time at the pool where we also had nachos too. I’ve found many of the pool bars in Vegas do good food too. After hours in the sun, it was time to take a break so we went to Holsteins in the Cosmopolitan for their happy hour. We had some sliders and cocktails before going for a walk on the Strip.

When in Vegas we like to go for one higher-end meal. It’s always had to choose as there are so many top restaurants. After much deliberation, we settled on Lakeside at The Wynn. We had a delicious meal in front of the Lake of Dreams which every 15 minutes or so has some music/performances – Some which have to be seen to be believed! Afterwards, we went upstairs to the bar which again looked out onto the lake and had some champagne. Outside of The Wynn, they have a water show so as we headed back to the room we stopped to watch it before walking back.

We got up early to make our way to the Las Vegas sign. We walked from The Cosmopolitan, it’s a bit of a walk but you can always stop off in the different hotels on your way. We were going to the sign to take a photo of our Voltage Sport NFL launch. It’s about a 15-minute walk past Mandalay Bay. Once we’d got “the photo” we went to the convention centre in Mandalay Bay as we were attending Interbike. We had a good time meeting people, looking at products and carrying out our own research.

After many hours we were ready for a rest and so we went to the happy hour at House of Blues for appetisers and drinks (and a rest). We then made our way to Slice of Vegas for more happy hour drinks – We’ve eaten here before and the pizza is always good! After that, we walked back towards the Cosmopolitan. After a long day we were ready for food so decided to stop off at Bobby’s Burger Palace and had some tasty burgers!

Although still warm it wasn’t as hot and was a bit windy for the pool so we headed out onto the Strip. For lunch, we stopped at the Beerhaus at The Park outside New York New York. We walked around and also stopped at Diablos which is a Mexican bar we’ve enjoyed in the past.

It was our last night in Las Vegas for this trip. We have stayed in The Palazzo before and so we headed back in search of pizza where we found Grimaldis. We had some real New York pizza which was delicious!

After dinner we walked along the strip, stopping off at some of the bars on The Promenade and playing roulette at The Flamingo. We finished the night in the Rock Bar outside of Planet Hollywood.

Our last day in Vegas was spent with some final pool time before we went for a walk along the strip. We stopped to watch the fountains at The Bellagio for the last time.

We also went to the hotel to have a look at the Botanical Garden. We slowly made our way to Caesars Palace, where we stopped for a happy hour drink at Carmines before making our way back to the Cosmopolitan. Our plane was delayed so we had time for a meal at Holsteins were we went for burgers! We hung around the hotel before getting a taxi back to the airport.

As always, Vegas did not disappoint. We managed to fit in lots of things, relaxed at the pool and had a good time at many of the bars and restaurants which Las Vegas has to offer.