I have wanted to visit Sri Lanka for a really long time, it's in my top ten and I am determined to make it there soon. This week I bring to you a guest post from Stuart who has succeeded in making me want to visit even more than I already did!!

Many times we’ve been asked where we went on holiday & after stating, ‘Sri Lanka’, quite often receive some look of concern & the inevitable questions, ‘Is it safe?’. When I explain some of the history, climate, religion & landmarks, it becomes quite an adventurous, but safe tale.

There are many people who remember ‘Ceylon’ & its reputation as a premier supplier of tea (Ceylon tea is not only Black, which you can find more about within our resources pages on our website). However, it’s darker side uncovers the strife caused by the 30-year civil war between the North (predominantly native Indian Hindu ’Tamil Tigers’) & South (Native Sinhalese Buddhists). Following on from independence (from Britain) in 1948 the majority Sinhalese speaking Sri Lankans, attempted to make Sinhalese the sole official speaking language, disenfranchising & depriving many Tamil speakers of citizenship & forced migration to India. The subsequent revolts by the Tamil militia groups & Government forces led up to 100,000 people being killed from the early 70’s until it ended in May 2009.

Only in recent years has the far north opened to foreign visitors, also leading to a general increase in tourism to this verdant, green, island nation.

We lived in the UAE, so exploring countries east of the Arabian Peninsula was a great opportunity rather than travelling to the traditional European holiday spots, surrounding the Mediterranean.

We’ve taken numerous trips to Sri Lanka & love the place, hence the title, ‘Island of smiles’. I always state to interested visitors, Sri Lanka is like a safe, clean version of India (not wanting to dismiss India, but I still believe if a visitor enjoys Sri Lanka, it’s a good introduction to what’s on offer in India). I have friends, especially female, who will not visit India due to incidences of molestation and reported cases of sexual assaults. This is especially the case during major festivals such as Holi. Again, we have to recognise these isolated incidents always tarnish a countries reputation & in no way suggesting you shouldn’t consider India, as it is vast in culture, size & languages. 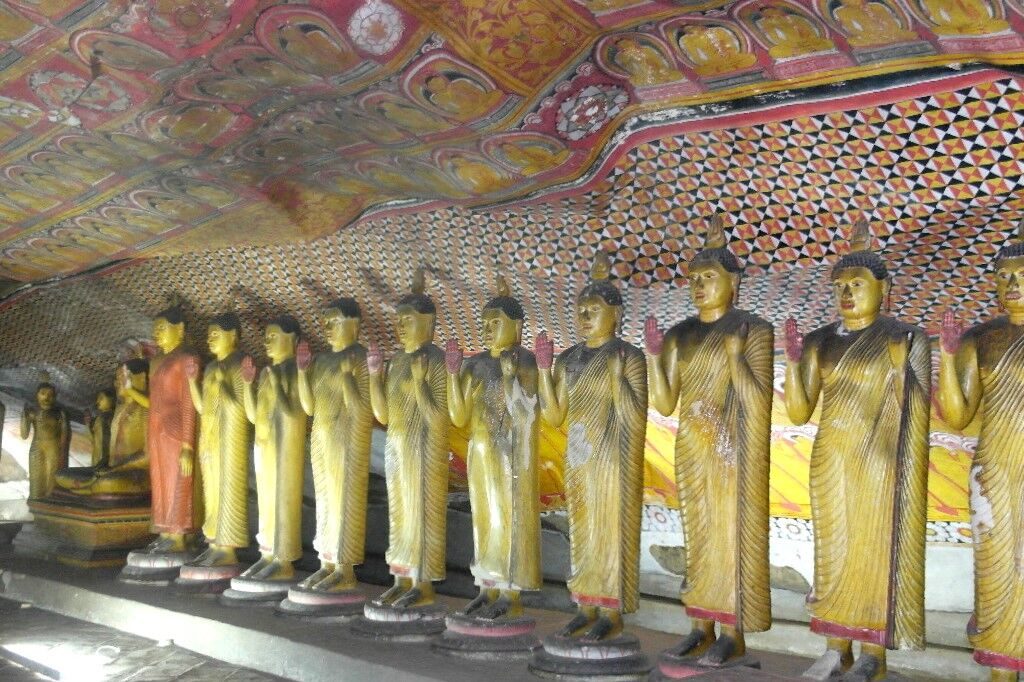 One particular trip was for a week to ‘Thilanka Resort & Spa’, in Dambulla, in the centre of Sri Lanka near the ancient UNESCO World heritage sites of the city of Sigiriya, where a palace was built on the top of a 200m rock, and the Golden Temple of Dambulla.

The Golden Rock Temple, Cave Temple, also known officially as the Rajamah Temple of Rangiri Dambulla, is the largest Buddhist cave monastery in Sri Lanka, dating back 22 centuries. Built into a rock face it holds 157 statues of the Buddha and some magnificent images painted on the rock cave faces. Incidentally, it was also from here where the Buddhist monks led the nationalist uprising against the British in 1948.

However, the real fun is in the journey.

At the time, we only had our eldest daughter, Amelie, who was 10 months old, so I had the unenviable task of walking up the 100’s of steps to get to the temple, passing a few street sellers, with unique wooden puzzle boxes & other knick-knacks for sale. It’s amazing how a 5Kg(11lb) weight can feel like 50kg (110lb) Note to self: ‘walking uphill is far easier on your knees than downhill’. We always come away with some trinket or other of interest, but hopefully a unique memento to the region. (It’s no surprise when a few visitors to our last home stated it reminds them of a museum!). Sri Lanka is home to one of the World’s richest deposits of Gemstones, such as Sapphire, Ruby, Topaz, Amethyst and high purity Gold, such as 22K, which is sold as much to the local population as it is to the rapidly increasing tourist market.

My wife & I, both being of a fair complexion & our daughter the same with blue eyes & fair hair, attracted the local girls school party (as well as the monkeys). I’ve never quite been mobbed by so many school girls wishing to touch a baby. It can get a little overbearing except for the beautiful toothy smiles from all the girls, as they attempt to stroke, pat & generally touch Amelie, almost as though they have never seen a blonde, blue-eyed baby before.

The monkeys, forever little thieves, always on the lookout for some extra food or another plaything they can run into a tree with. 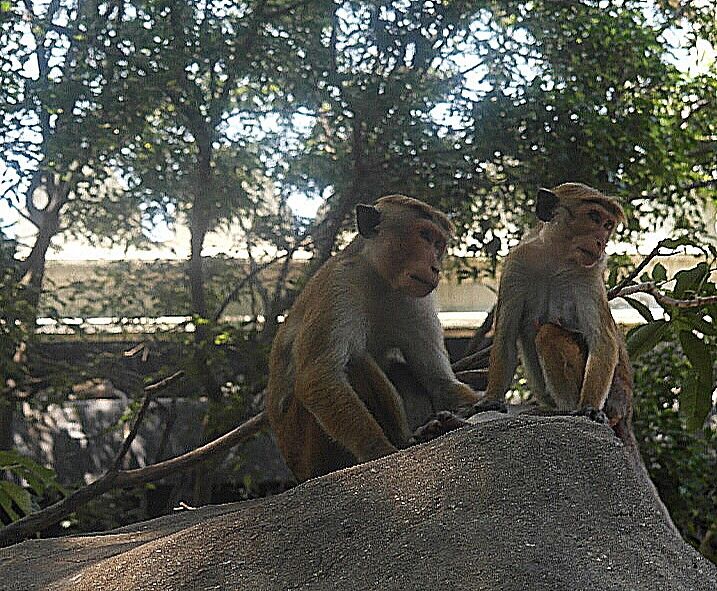 We went to the cave temple, which as is standard practice in many temples, can be entered only barefoot. Shoes are left at a station with a short 20-30 metre walk to the main entrance & then across a courtyard, which is hilarious at the height of the day, with the gasps of, ‘ooh, ah, ee!’ & imitations from Monty Python’s ‘Ministry of Silly Walks’ sketch, with people running across the sun-baked courtyards barefoot, before getting back to some shade.

A great day out for what was a beautiful relaxing holiday. We would recommend if you’re going to Sri Lanka & can manage to take it slow, it’s worth staying inland for a few days otherwise it’s a trek, with a 4-5 hour drive from Colombo and the West coast. Get to know the local Tuk-tuk drivers, who will act as tourist guides in return for the price of a fare. The chances are the level of service & comfort will be higher than the coastal resorts, which are priced at a premium. Our 1 week stay cost approximately 500 Euro. We ended our holiday just North of Galle for 3 days, which was at least double what we paid in Dambulla.

As with every location, it’s worth knowing a little bit of history and culture before being an ‘idiot abroad’. For example, if I was travelling to the North, it’s worth checking the route, as there have been some continuous mine-clearing operations, so it wouldn’t be wise to explore off the beaten track without a guide. However, most of the major tourist attractions and hotels are in the South, as the North slowly re-opens in areas, such as Jaffna & Trincomalee.

There are still ongoing problems within Sri Lanka, as the government in 2015 had initially refused entry to the UN to investigate alleged war crimes during the civil war. In late 2015, the government temporarily refused entry to foreigners wishing to travel to the North. However, the latest news is that Sri Lanka is expected to become a fully demilitarised country from 2018, which is encouraging. The whole country is now free to visit.

Regardless of its recent history, Sri Lanka makes a great vacation spot. The food is tremendous, being a relatively small island, with fish a staple in many recipe combinations. 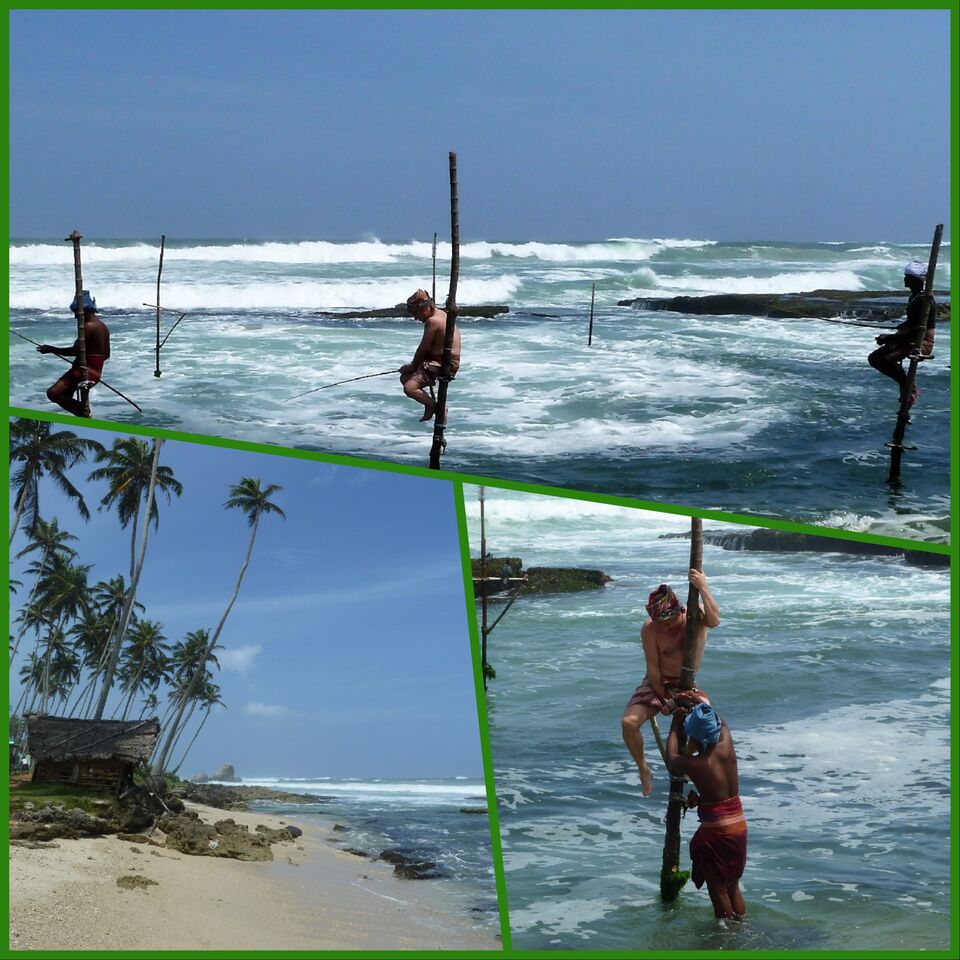 The weather is constant more or less all year round. It does experience a monsoon season, but all this does is provide an opportunity to take advantage of cheaper accommodation.

The best ‘recommended’ time to go is from November to April, but even if it does rain, it will be a short, sharp burst probably lasting an hour or so.

Temperatures range around 25–30ᵒC (75-90F) all year round, with humidity increasing during the Summer months.

There are many jewels to explore, such as Galle, the Portuguese fortified village in the South; Kandy, the ancient capital with the Temple of the Tooth, the sacred resting place for one of the Buddha’s teeth; secret beaches in Mirissa, Colombo, the capital; the many tea plantations; elephant watching in the wild & a must is taking a train journey with all the locals and whale watching. Shopping for precious and semi-precious gems and Gold Jewellery, where you can have something simple custom made in days is a must, considering the good value in getting it from the source. I wouldn’t recommend getting a hire car as the island is well served by both the train, which is an experience, as well as local taxis & Tuk-tuks. I gave up my seat once for an elderly woman & was met with bewildered stares & many giggles by most on the train! Planning a trip to Sri Lanka? You don't want to miss this Sri Lanka 10 day itinerary!

Stuart & Jacqueline Phythian are long term European (Anglo-German) travellers, having lived the last 10+ years in the UAE, where they originate. After senior executive roles in the Engineering industry, Stuart, now has his own consultancy whilst writing about their ‘Tea’ related travels on their blog, Teaandsun.com.